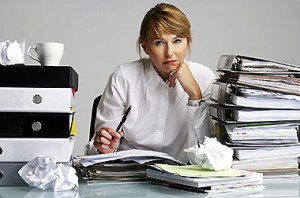 A 2008 study published in the online edition of the journal Occupational and Environmental Medicine, reported that adults with ADHD suffered low job performance and more absences and accidents compared to their non ADHD counterparts.

Lead researcher, Dr. Ron de Graaf of the Netherlands Institute of Mental Health and Addiction, noted that difficulties in concentrating costs the average ADHD adult 22.1 days of “role performance” per year, including 8.7 extra days absent. The researchers discovered that there were many more adults with ADHD whose job performance was affected than they’d originally expected.

Dr. Ronald C. Kessler of Harvard University, a co-author of the report, noted that ADHD in adults can be quite impairing, perhaps even more so than those suffering with depression. In his work with that population, he found that treatment for an individual suffering from depression costs $1,000, preventing $4,000 in lost productivity and predicted that adults with ADHD would cost even more in lost productivity.

“From a societal point of view, it’s a pretty big deal, because ADHD affects work performance even more than depression does,” Kessler added. “It’s more persistent and severe than many mental disorders, and it results in more sick days, more accidents, and more problems interacting with colleagues.” His hope is that further studies could be implemented to show that proper treatment for ADHD adults would increase productivity. Further, Dr. de Graaf suggested that having employers screen and treat employees for ADHD would be a cost-effective plan.

Linda Anderson, past president of The Attention Deficit Disorder Association (ADDA: www.ADD.org), expressed concerns over the data, noting that the new study may underestimate the numbers of adults who actually have ADHD, as many may not have jobs and those who do, often struggle to keep up. However, she added that there are treatments available to help adults with ADHD who are having difficulties and that it’s vital for these adults to seek them out.

The researchers found that the majority of the lost performance was due to reductions in quantity and quality of work rather than actual absenteeism, a fact they found most striking and disturbing.

The study was conducted by interviewing 7,075 workers aged 18 to 44 in 10 countries. They concluded that of those studied, 3.5% had ADHD.

The rate of adult ADHD in the USA was shown to be 4.5% among workers and costing an average of 28.3 days performance.

Of the 10 countries studied, France had the highest number of ADHD in working adults- 6.3% – but lost productivity was shown to be at 20.1 days.

The other countries studied and days lost per ADHD worker were reported as follows:

Interestingly, The Netherlands had a 4.9% rate of ADHD in working adults but there was an improvement, rather than a decline in work performance. The researchers were unable to explain this finding.

Researchers also found that ADHD was more common among men than women, more common among blue-collar workers than white-collar professionals, and more common in developed than developing countries (such as Mexico, Lebanon, and Columbia). Age did not appear to be a factor.

Kessler noted: “While surveying mental disorders around the world, we’ve interviewed close to 200,000 people in almost 30 countries, and we’re discovering that an enormous number of adult workers — more than 3 percent on average — have untreated adult ADHD”

The report showed that besides the 22 fewer days ADHD adults worked, there was an average of more than eight days where ADHD adults said they simply were unable to carry out routine tasks, and nearly 14 days of reduced quality in the work they produced.

“The fact is that adult ADHD hasn’t been on people’s radar screens,” said Kessler. “The feeling was that somehow magically when kids with ADHD grow up they grow out of it. But this survey shows that this is not the case.”