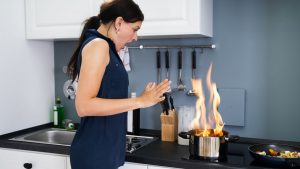 Betsy never got into trouble in school, back in the 1960s. She was a model student, actually. Sweet, quiet and well-behaved. Her grades in Citizenship were consistently “A”s. Her teachers adored her. But they couldn’t figure out why such a bright, capable young lady would forget to turn in her homework every day. Or why, during class discussions, she would find it more interesting to watch the leaves on the trees fall silently to the ground when Fall approached.

What they didn’t know was that Betsy suffered from attention deficit disorder, or, ADHD. Back in those days, ADHD was called minimal brain dysfunction. And Betsy didn’t seem to fit that picture!

Years later, when Betsy finished college (though it took her an extra 2 years to do it), she landed a job as a law clerk in a busy law firm. She had given up the hopes of becoming an attorney herself, for keeping up with her studies in college was too difficult. She would find her mind wandering during lectures, especially in the larger ones, where she shared the room with a hundred other young students. How much more interesting it was to think about other things!

She thought she was dumb. Stupid, even. Why was it so hard to even write a silly paper? The thought of reading the required books, even, was too much, let alone organizing her thoughts onto a piece of paper.

But she persevered…and graduated. Barely.

At 24, she married a young man from the law firm where she worked and they settled down. Continuing to work to help support themselves, she found herself getting into trouble with her bosses, who complained that she was too disorganized. Piles of papers decorated her desk. Projects were late getting in. She felt like a failure.

When she became pregnant with their first child, she was secretly thrilled at the idea of staying home to take care of the baby, and escaping from the stress of her job. And since her husband’s income allowed her to make that choice, she left her position just before her baby was born.

Finally! Something she could be “good” at! How she loved this child. But with the lack of sleep, and constant demands of a colicky baby, Betsy began to slip into a depression. Why, she couldn’t even handle being a mother!

Betsy decided she was going to try harder. Though their small home was often in shambles- with toys strewn everywhere, beds unmade, and dirty laundry piled high, she decided that she would change and become the woman she really wanted to be: organized!

One night she decided she would bake a special cake for their one year anniversary. After following the directions carefully, she tossed the batter in the oven and sat down to read a magazine. Before she knew it, she became distracted and found herself working on her scrapbook project while her baby napped. So engrossed was she in her efforts to organize the baby pictures, she forgot that the cake was in the oven, till the smell of burned batter swirled through the room. In horror, she ran to the oven and removed the charred remnants of her special dessert.

What Betsy didn’t know at the time, was that she was suffering from attention deficit disorder. The hallmark symptoms of ADHD are inattention, distractibility, and in many, impulsivity. Though Betsy didn’t appear to be hyperactive by any means, she certainly did have the other symptoms. She had recently seen a tv show that talked about ADD, but she thought it ridiculous. Only children had ADD! And boys, at that!

But when disaster struck in the kitchen, she began to think about all the problems she’d been facing her whole life: dreaminess in class, disorganized at home, and feelings of total incompetence.

With the encouragement of her husband, she decided to look into the possibility of her having ADD. After finding a skilled clinician who specialized in the disorder, she went through a rigorous evaluation. Bingo. The psychologist, after talking with her for a long time about her childhood, reviewing her report cards, and giving her a battery of tests, explained that her suspicions were correct. She had attention deficit disorder, inattentive type.

He advised her of the treatment options available, and she entered counseling with a therapist who understood ADD in adults. She consulted with a psychiatrist who recommended medication, explaining that ADD was a neurobiological disorder. Her brain chemicals needed the help of a medication to help her to focus, stay on task, and slow her racing brain down.

The psychologist also suggested she attend support groups and enlist the aid of an ADD coach.

Betsy still has ADD. But she has it under control now. She still has trouble keeping up with a busy household, but thanks to the treatment she’s now getting, she no longer sees herself as incapable. Instead, she learned to modify her life in order to achieve success. She changed her expectations of herself, too. Instead of cooking lavish dinners every night that created such anxiety and dread, she learned it was ok to carry out…and to GO out. She enlisted the help of a babysitter so that she could have time to herself. She felt revitalized and refreshed.

And she saw the doors open to a much brighter future. Finally.